IN SEARCH OF GLYMONT – Part I

ORIGIN OF THE NAME GLYMONT I

As a young child growing up in Potomac Heights, I never thought of this anomalous name. The rest of the names were all too familiar to me. Everyone in this small but content development knew the names of most of the streets in the “Heights.” To me, I just learned how to navigate from one friend’s house to another. I’m sure everyone else felt and did the same thing. We lived, played, and for some, attended school. Oh, we had some great times growing up, but we were like most young kids playing games at night and engaged in some mischief that involved many pranks within the community.

Yes, a lot of great memories and some not so great. Death came too early for some of the kids that lived in the Heights and the surrounding areas. Most everyone had friends in other towns. Indian Head, La Plata, and Bryans Road were places to go and have fun, but we were older, and we never had to worry about our safety. The laid-back, uncomplicated neighborhood has changed. People have changed. The world has changed, and the way we carry on day-to-day activities has evolved. We live in a digital age where we let computers do things for us. For this alone, I’m thankful.

The computer allowed me to find things that weren’t readily available 40 years ago. J. Harry Shannon (AKA “The Rambler”) probably used an Underwood type 10, if I had to guess. Thanks to his writing adeptness, he left a roadmap for me to follow in my search for the meaning of the name Glymont and how long it has existed.

Glymont was the only uncommon name I remember from Potomac Heights.  Where did the name originate? What does it mean? I don’t have all the answers, but I know that several publications and sources asseverate that The Washington Fruit Growers Association proposed the name Glymont in 1850. This claim is inaccurate.

The name Glymont is of Welsh origin, but Welsh descendants were very uncommon along the shores of the Maryland side of the Potomac River.

The name Glymont has been traced back to England, and it means to bind or tie.

When Lord Baltimore bequeathed 5000 acres to Cornwallis in 1654, there was an immediate dispute over the land boundaries, as you will note in the map below. 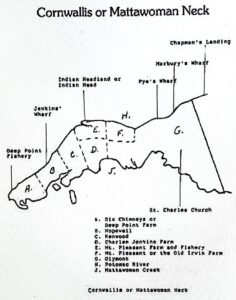 Several parcels of land were sold from the Potomac to the Mattawoman Creek to the Potomac named Glymont.