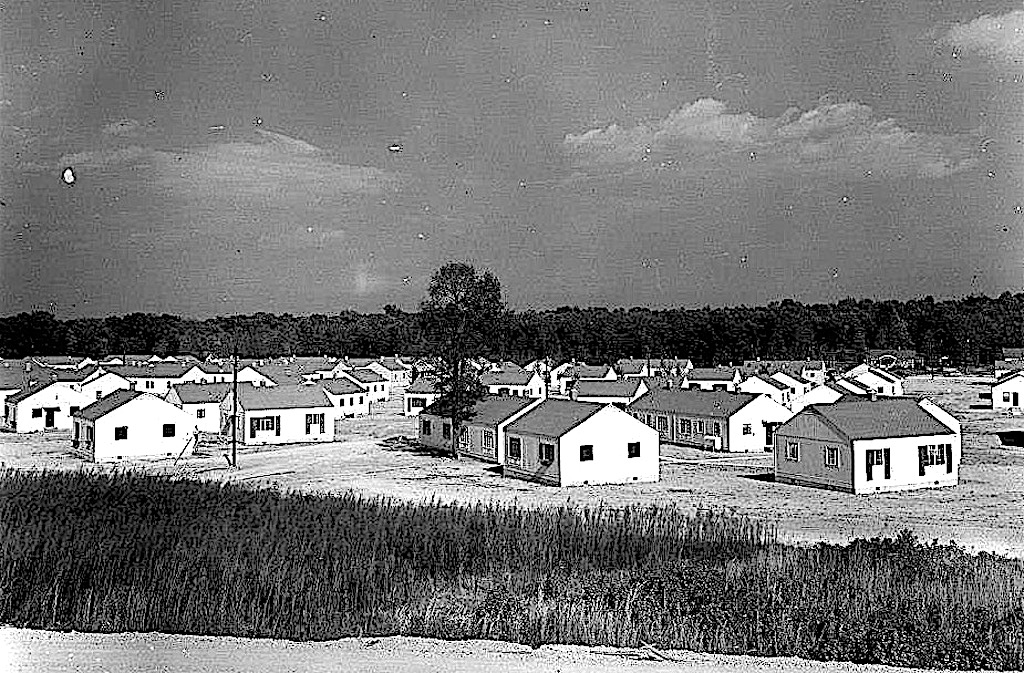 As the possibility of war grew near, the Naval Powder Factor needed to expand its existing workforce. The Public Building Administration energetically sponsored the dire need for homes to house the additional workers.

Potomac Heights is one of the developed communities to help fulfill the growing demand for workers from every trade at the Naval Powder Factory.

In 1940 the Federal Government began clearing the densely wooded area to build and complete the construction of 586 houses. These homes were 24 feet by 28 feet with five different designs.

In 1943, 100 of the homes in Potomac Heights (Name came from its location along the Potomac River and its rolling hills) were moved to the Perry-Wright development set aside for workers of color.

The neighborhood had 153 detached four-room houses. The others were two-family homes with one, two, or three bedrooms.

The homes were made of kiln-dried lumber and other prewar quality materials. By 1954 most houses were covered outside with asbestos shingles, imitation brick, or stone. Inside walls were of plywood, plasterboard, or Masonite.

All of the units used are prefabricated homes, and the specifications call for dismantling ability as one of the major requirements. Each unit has been erected on a designated site, then dismantled and loaded into a truck. Then, they were transported 30 or 40 miles over rough roads, then re-erected at the residential location.

The Government guidelines encourage the design of prefabrication, then quick dismantling of each home for future use at another location. The PBA hoped to redistribute those homes as needed during and after the war.

The government-planned community has numbered and named streets. The names started originally with Archer and Beecher were removed when the homes on Archer and one side of Beecher were moved to Perry-Wight off Strauss Avenue. Some of the names in Potomac Heights received their names after the type of trees present when the homes were built.

Archer homes extended across what is now 210 or Indian Head, Highway. These homes were transported by trailers. They were not dismantled as they were designed originally. Homes were needed immediately, so they were lifted off their foundations and placed at Perry-Wright. A couple of homes were purchased and moved to private property and are in use today, but have been added additions and sided with brick or siding.

The one-time government project was purchased in 1949 from the Public Housing Authority for $600,000. At that time, every house was occupied, and the Potomac Heights Mutual Homeowners Association, Inc., a co-operative adventure, was formed.

Much had changed since 1954, when occupancy was high. Gone are the days of the monthly rent of $27.00 for a house, utilities, and repairs. Poor management has led to higher HOA fees with more responsibility placed on the homeowners.

Potomac Heights is a very historical place and needs to be maintained. It requires a community of volunteers to assist homeowners in minor home repairs and other community matters.

1 Floor beams rest on pipe piling.
2 All Structural sections are prefabricvated.
3 Note that interiors are allready papered.
4 Reminiscent of rural barn raising.
5 A compact modern heater is installed
6 Warm-air ducts are connected.
7 Roof sections have weatherproof joints.
8 Porch flashing is integral with wall.
9 The chimney is the finishing touch.