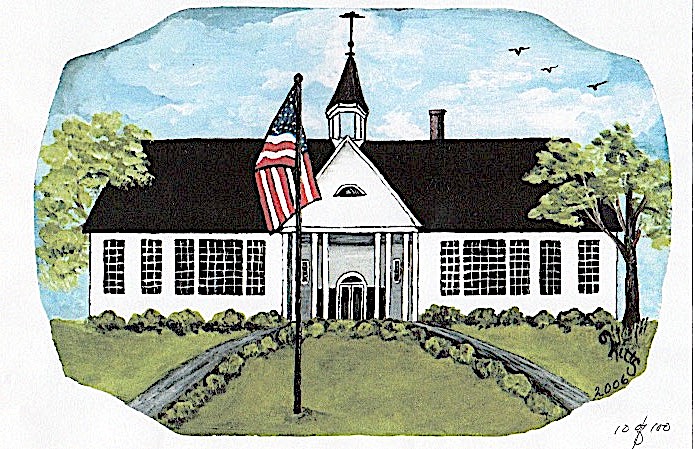 In 1919, Admiral Henry Lackey commissioned a building which would become Lackey High School, located approximately 100 yards from the gate to the naval base,. It was the first four-year high school in Charles County and in 1919, student enrollment was 252. The class of 1923 was the first graduating class.

“”Born in Norfolk, Virginia, on June 23, 1876, the son of Navy engineer Oscar Hamilton Lackey, Henry Ellis Lackey, served in various capacities as an engineer, inspector, navigator, and line officer in the late 19th and early 20th centuries. Graduated from the U.S. Naval Academy in 1899, after seeing active service as a midshipman in USS New York (ACR-2), Admiral William Thomas Sampson’s flagship, during the Battle of Santiago in the Spanish-American War, he made his mark as an engineering officer, following in his father’s footsteps.

After a few months’ duty in 1904 with the Reserve Torpedo Flotilla at Norfolk, Virginia, he received an engineering assignment in USS Galveston until April 1906. From 1906 to 1908, he saw duty in USS Wilmington, after which he was assigned to shore duty at the Naval Proving Grounds at Indian Head, Maryland, until early 1910.

In March 1910, Lackey was assigned to duty with the U.S. Asiatic Fleet as Senior Engineer in USS New York (ACR-2), followed in August 1910 by promoting the personal staff of the Commander-in-Chief, U.S. Asiatic Fleet, as Fleet Engineer. In that position, he surveyed channels in the Yangtze River between Wuchou and Shanghai to enhance the effectiveness of U.S. naval forces overseeing the enforcement of U.S. treaty rights in China.

After a tour of duty at the Norfolk Navy Yard from 1911 to 1914, Lackey returned to sea duty as the Navigator in USS Georgia (BB-15) in January 1915, seeing hostilities at Vera Cruz, Mexico. Upon the decommissioning of USS Georgia in December 1915, he transferred to USS Kansas (BB-21) as the Executive Officer, holding that position until 1916.

From January 1917 to early 1920, Lackey was the Inspector of Ordnance in charge of the Naval Ordnance Proving Grounds and Powder Factory in Indian Head, Maryland, where he performed his wartime duties so well that he received the Navy Cross.” – NHHC